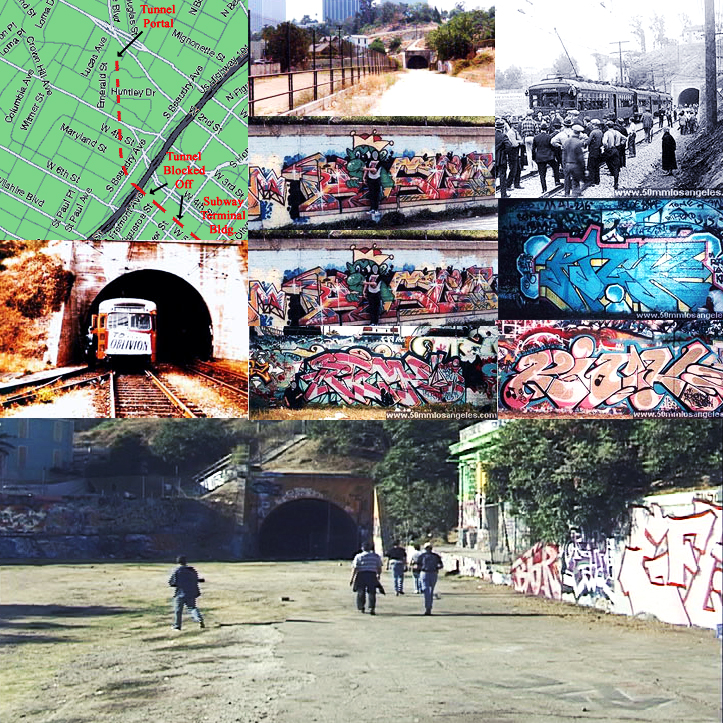 To some of these questions surrounding the Tunnel, only a few would know the actual answers, and only a few know the facts, not the rumors nor stories nor the urban myths, but the hardcore truth. They are those that witnessed the birth of the now internationally known yard, called the Belmont Tunnel.

Let me begin by taking you back a little here and school you on some L.A. graffiti history, and I speak only of the Tunnel. I was in my senior year at Belmont High School, the year was 1984, hence the 84′. The school was roughly two blocks north from the yard, and it seemed that nobody cared much of what went on at the Tunnel, not even the cops.

So it was a perfect spot to paint. At that time, RICK, in case you are not aware, is also CRIME, R.I.S.C.O. (R.I.P.), PRIMO-DEE, DAVE, and I would hang out at Rick’s pad which was conveniently a few blocks away from the Tunnel as well. We would practice sketching pieces for our recently formed crew, Los Angeles’ Bomb’ Squad, known to many as L.A.B.S.

We even did a piece in the backyard of Rick’s pad. Anyways, as soon as we got a hold of some more cans, we would head out to the Tunnel and bust. I remember it being comfortable painting there. I guess cause we were sort of hidden and away from any view. We’d also meet up with GEO ONE (R.I.P.) from Today’s Writing Artists, T.W.A., who also lived nearby, and practice our tags and throw-ups and sketches.

GEO would hit that shit up more than any one of us and would eventually master the art of writing before many of us. You would later see it in his tags that this cat was way ahead of his time. His tags were smooth and fresh. They would just flow. The first piece at the Tunnel was a “RISCO CITY” we did and a ‘Los Angeles Bomb Squad’ piece.

Although, I think for me, the most memorable piece and the moment was when I battled GRAFFONE. Graff had come down to the Tunnel a couple of times, and I really do not remember how he became aware of the place, but all I know is that he was painting there too. He also did a piece for the Shake City Rockers, an L.A. breakin’ crew at that time. Since we were a little territorial about the Tunnel, I decided to battle him. Graff was and is a cool cat, and we merely battled for fun, we basically just wanted to paint and bust.

My piece had Graff’s name in green being crushed by a Shandu on top of his name. My name was filled in yellows and reds with a black outline. Graff One did his piece with a dope B-Boy character I thought it was cool. Unfortunately, I never did take pictures of any of the pieces, but I know they are out there, somewhere, and hopefully, someday, I come upon them.

Back in those days, we’d do our pieces raw, working with what we had – stock tips, any kind of spray-paint, cheap or good, and we were also clueless about buffing. So there we were, battling, and I was throwing paint unto a fresh wall of cement, strictly bare concrete.

It was sort of a euphoric rush- feeling to watch the paint disappear into the pores of the wall and attempting to outdo this guy. That I’ll never forget. Even if it did take two or three coats to finish, it was still worth every can of paint.

Back then, people hardly knew of the Tunnel, only those who lived nearby and/or would pass by the bridge overlooking the Tunnel off Beverly Blvd or those that – me and the crew would bring in. The Tunnel became to us like our little clubhouse, our haven. We would hang out at the Tunnel – not knowing what would lie ahead in the future for this abandoned location.

We’d call it the Tunnel because of the large Tunnel that is there, it used to be a tunnel where trolleys named “The Big Red Cars” would run through from Glendale Blvd. all the way through to 4th & Hill street in the downtown area. And since it is next to ‘Belmont’ High – “Belmont Tunnel” became the given name.

I would eventually leave the scene, and RICK would organize a new crew called K2S, Kill To Succeed, recruiting PRIME as one of the members of the crew. Shortly after, after being encouraged by RICK, SINE (R.I.P.) and MAKE/GALO/TIME would organize their crew called STN, Second To None. These crews would reign all throughout the mid 80’s continuing the legacy once begun by LABS. We all rocked the Tunnel and placed it on the map – making it what it is today.

After the mid 80’s, other crews and writers from throughout the L.A. area would surface and come to paint, and it has never stopped ever since. Not knowing or soon forgetting that cats like us started this shit.

The Tunnel instantly became a national phenomenon, especially after the publishing of the graffiti book called Spray Can Art, where writers such as RICK, PRIME, GEO, and TIME, who was also MAKE, were featured in. Amongst other writers featured in the book were also DREAM, D.E.L.O., SOON, and RISKY. Soon other writers from other cities such as SEEN from New York and writers from Chicago would pay their visit to this L.A. historical yard.

The Tunnel has now been a stopping point for tour buses, has been featured in movies, videos, books, and magazines. It has also been home to many memorable pieces and battles and also home to many of L.A.’s homeless.

It seems as though something that a bunch of guys started to do as a way of expressing themselves artistically has found its way into the mainstream of the art world & society. Amazing!

To all the writers that did a piece or are doing pieces at the Tunnel, keep up the excellent work and always remember those that paved the way for you to be paint in there. Every week is always something different and dynamic, it’s good to see a real inner-city Gallery in our city for all to enjoy. Peace!

It’s also sad to say that the Tunnel has now been sold to developers, and after this year, this sanctuary will no longer exist. So rock that shit with some dope pieces.

If you would like more historical info on the Tunnel itself, go to this link.